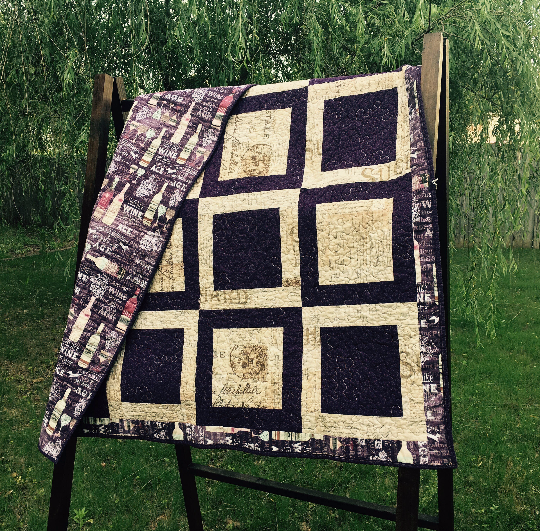 I’ve made a couple of wine-themed quilts in addition to a coffee-themed quilt.  They’re fun.  The first one I made was really and truly a whim.  I was sitting at my sewing area and saw two fabrics that made me think of wine.  One was some label-print fabric meant to mimic the old wine bottle labels.  I’d bought too much of it for a different project, and it had been folded up for a couple of years with nothing in mind.  The second fabric was a textured purple fabric from a completely different project – a t-shirt quilt.  But they looked so pretty next to one another that I dropped whatever I was working on and began making squares.  I loved the contrast!

A couple of days later I went out to JoAnns because I remembered they had wine-themed fabric.  I found one I liked and gave the quilt top a small border around the edges to tie together the front and back.  The fabric has the phrase “Like wine I get better with age.”  I thought it was particularly cute. I used a close stipple with variegated purple thread to quilt it together.

Normally I use the fold-over method for my binding, but this one needed a more traditional one, so I kept up the purple fabric for this purpose.

This quilt was bought on my Etsy store for a wife’s birthday!

I have a second wine quilt for sale on my Etsy store right now.  Like the first one, the second was made on a bit of a whim.  I was speaking with a client at JoAnns, and we were standing beside one of the fabric bins that hold all of their jelly rolls.  I looked over and spied a wine-themed jelly roll, and I thought it was pretty cute.  So I decided to grab a couple and see what I could make.

At first I had planned on making a rail fence design, and that’s why I originally had cut the stripes and sewn them together in blocks.  But I realized it wasn’t going to look like what I had envisioned, so I stepped back and decided to make a more modern design.  I went back and forth on whether to use black stripes in between the rows or wine-colored fabric.  I polled my ever-patient husband, and we both agreed that the black made a better frame and helped the different colors from the fabric stand out.  I did a rotating pattern and liked the staggering design that came out as a result.

Just like the first one, I used a close stipple and maroon thread to quilt it together.  Then I put on the black binding and was all set.

I know I mentioned “stadium quilts” in a previous post, so I figured I’d go ahead and discuss them.  As said before, the whole idea of a stadium quilt is that it is usually in school colors and is 4’x4′.  This isn’t the usual size of a lap quilt, but the logic was that at 4’x4′ it would be big enough to cover your lap while sitting on those wonderfully comfortable bleachers at football games while also being small enough not to drag around or have folks stepping on them.  Of course, they also happen to be the perfect size for draping over the back of a couch or chair.

I happen to work for a particularly large school system that has over 20 different high schools.  (This still baffles me as I graduated from an area with one high school for the whole darn county!)  That being said, I figured that if I stuck to the basic colors of the local schools I’d happen to catch most professional and college team colors as well.  One thing I know for sure – you Buckeye fans sure do love your Etsy stores.  I probably get more hits on my Etsy store from Buckeye fans than from any other team.

When I decided to make the stadium quilt, I had two goals in mind.  1. Make some smaller quilts to sell ready-made on Etsy as well as at craft shows.  My original lot was around 14 or so.  2. Use up as much of my fabric stash as I could without buying any more except for backing.  I’ve mostly stuck to this, but I haven’t been able to resist the occasional gold or gray since they’re so wonderfully useful.  I’ve also taken to strolling by the remnant bin at JoAnn’s and seeing if there’s any generic quilting fabric that is handy.  The remnant bin and I are now officially old friends.

I also took some time and experimented with a new design – the “split rail,” aka the “rail fence.” I really liked it and had fun using it more.  I also experimented using both cotton backing and flannel.  After all, if the idea was to stay warm during games, then flannel was the way to go.  In addition to my newfound appreciation for flannel, I also found that I simply LOVE crepe back satin.  I used it in a couple of quilts and like the texture and sheen of it.

One color combo I was surprised looked as good as it did was the orange and blue.  For the back of it, I found an orange and white tie-dye style flannel, and it looked great!  I do think the rail fence styles look prettier overall.

Related Posts – mostly about using up your fabric stash: