So I love going to the Georgia Renaissance Festival.  It’s always fun, and I find some super cool bags and jewelry.  This post is about one not-so-pleasant episode years ago.  That being said, I’ve gone back just about every year and always have a blast.  This year was no exception.  But while there, my husband and I were reminded of this story and entertained our friends in the re-telling of it.  I thought I’d share with you all as well.  Here’s another “empty bobbin” moment for you.

Empty bobbins are moments in life where we pause and reflect.  It’s like when your bobbin runs out in the middle of a project, and you have to pause everything you’re doing to reload.

This incident took place about seven years ago when our daughter was about 6 months old.  We went to the Renaissance Faire in Fairburn, Georgia, and it was a hot day already.  It was also crowded. My husband pushed the stroller over the Georgia red clay of the parking lot as well as the gravel and on in to the actual fair.  Once we were in, I took over the stroller duty, and we looked in the different booths as we strolled.

My husband is 6’1”, and I’m 5’ 5.5” (yes, the .5 is important), so it’s easy to understand he’ll often outpace me without realizing it.  I rounded a corner, still pushing the stroller, and a lady sitting in the front of a booth to my right called a guy’s name and pointed to the stroller.

I’ll take a time out and comment that it actually wasn’t unusual for folks to point at my daughter while we’re out.  She had a large dose of my husband’s Nordic ancestry, and her big blue eyes and fair skin get her a lot of compliments.  (She was still bald at 6 months, so her curly blonde hair would come later.)

So the lady pointing to the stroller didn’t really strike me as odd.  After all, the Renn Faire folks are supposed to interact with the guests, and they’ll say all sorts of silly things in an effort to interact.  Going back to the pointing lady in the booth, I looked over to whomever she called, and a guy working the strength test booth, the one with the mallet and the bell, started walking towards me.  He was tall and not exactly fit.  He had long, stringy black hair that went to his waist tied behind him in a low-set ponytail and a goatee.  He was so tall that it only took a few strides to bring him even with me.  As he stopped beside me, he put his pointer finger on the stroller and said, “Stop” somewhat haughtily.

My thought was something along the lines of Okay, not the most polite way to start a conversation, but I’ll play along.  What’s funny is that the Renn Faire carnies are the thing my husband likes the least about the Renaissance Faire.  I decided to play along in the spirit of the Renn Faire, so I stopped walking and called out to my husband who had accidentally outpaced us, although we were both so engrossed in the booths that we hadn’t noticed.  He turned around, and the man with the ponytail beside me raised his arm and hand towards my husband and crooked his finger at him in the “come here” signal.  Again, I’m thinking Not exactly polite.

I’ll take another time out to describe a peculiar trait of my husband’s appearance.  He has a beard. Not a little, scruffy thing.  No.  It’s a nice, full, Bob Villa, Viking beard.  I love it.  And when he’s angry, he bites his bottom lip, making the part of his beard below his bottom lip stick out.  I refer to it as his “mad flag.”  And when it goes up, you need to back the hell down.

At the sight of this tall, ponytailed man condescendingly signaling him to come to him, I could see from my position several yards away a distant mad flag signaling a warning.  In the spirit of Renn Faire, my husband simply replied, “No thank you.”  Whew, he chose the path of politeness.  We could go.

The man beckoned again, and I looked up to my husband somewhat helplessly.  Whatever Ponytail had to say had better be feckin’ hilarious, but it wasn’t off to a promising start.  In the spirit of Renn Faire – my husband walked over.  He didn’t even have time to stop when the guy uttered what would become a family saying for years.

“SHE carried the baby for nine months; the least YOU can do is push the stroller.”

How judgmental could you get?  The implications in such a simple statement!  In one comment, he’d managed to question both the role of father AND husband.  This guy had no idea who we were as a family.  For all he knew, my husband could have been suffering from some arthritis incurred from injuries he received from an IED from his days in the service.  I could have been trying to get some resistance training in as part of my triathlon conditioning.  This man only knew what he saw – me pushing a stroller.  He, who probably had neither wife nor child, had decided to take it upon himself to be the Georgia Renaissance Faire Stroller Nazi, and we were a prime target.  Except we weren’t.  I was married to a Viking descendant.  Oh. Shit.  At that point, I knew the next move I had to make was in the best interest of everyone.  All I could see was my husband’s future mug shot, a bail amount we didn’t possess, and a court date we didn’t have time for.

I muttered, “Oh, he pushes.  He does,” and I started walking, pushing that stroller as fast as I could without outright running.  I passed my husband in a few steps, and his gait had definitely increased in vigor as he was approaching Ponytail, mad flag at full mast.  I whispered as I passed him, “Let it go.”  (Long before Frozen, mind you.)  And I kept walking and didn’t look back.  Somehow, I was hoping an invisible tether between myself, him, and our infant daughter would pull him along, and he would forsake sacking and pillaging Ponytail and his Test of Strength booth.  After a few moments, when I didn’t hear the sound of bludgeoning, I turned around to see him following me, red faced and furious.  Whew, it had worked.  He hadn’t hit him with his own booth mallet.

Unfortunately, the Renn Faire is in a circle, and my husband’s hackles were definitely up as he spied him through the fair exit.  I mentioned something about bail money, and we managed to leave the fair without physical altercation.

I’ll add the disclaimer that the vast majority of folks who work a Renn Faire are really stand up people and fun to be around. This experience reflects our episode with one D-bag. 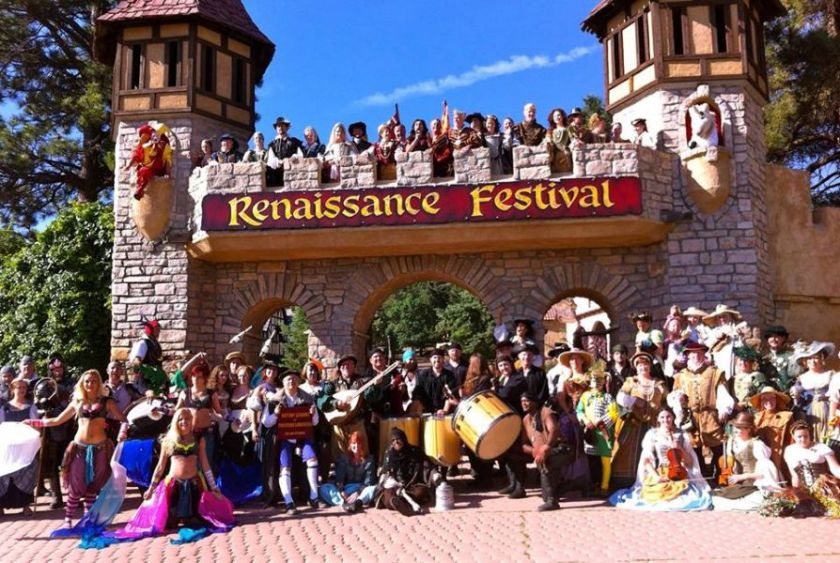 One good thing that came out of the trip was my daughter discovering the joy of dill pickles.